Nagarro sponsors Porsche team and takes 1st place in its class at the biggest race in the world! 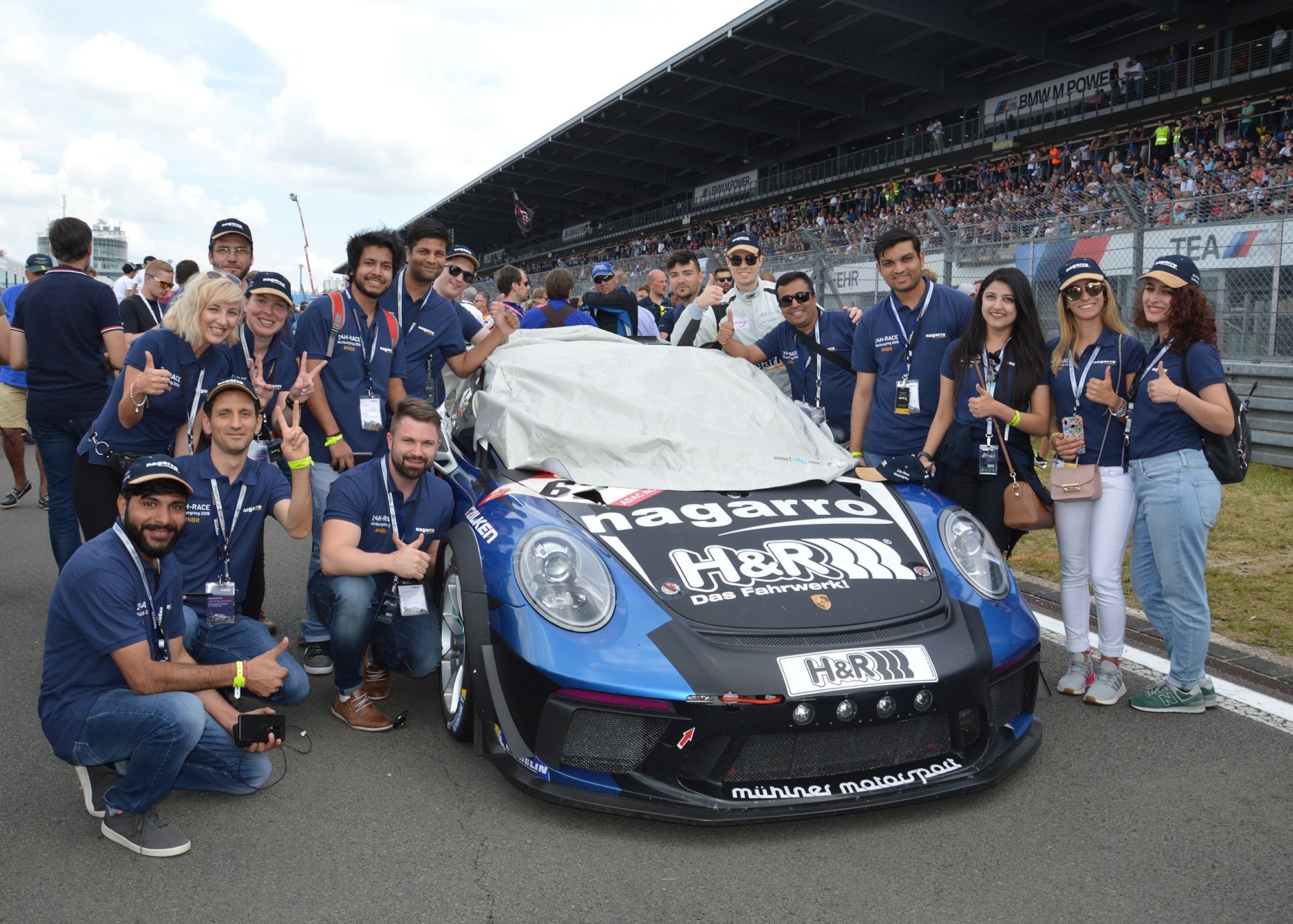 Strong performance and global mindset gave 16 young "Nagarrians" a special surprise: They flew in from all over the world and experienced the event live!

The Porsche 911 from Mühlner Motorsport in Nagarro design showed its power on the legendary “Nürburgring-Nordschleife”: At the end of the most famous car race in the world, our Porsche team secured the first place in its own class (SP7) as well as the 15th place out of 153 in the overall ranking. Nagarro congratulates the entire team and the drivers for their sensational performance.

Nürburg/Germany, June 25, 2019: 156 racing cars, 90 bends, and almost 26 kilometers—these figures will make every racing driver's heartbeat faster. Located in the heart of the German Eifel region, the “Nürburgring” is the longest permanent, most beautiful and most notorious racetrack in the world. For 280,000 fans the "Green Hell" was once again the scene of the spectacular 24-hour race during the last weekend. For the third time in a row, the technology company Nagarro successfully sponsored the Porsche Team of Mühlner Motorsport. 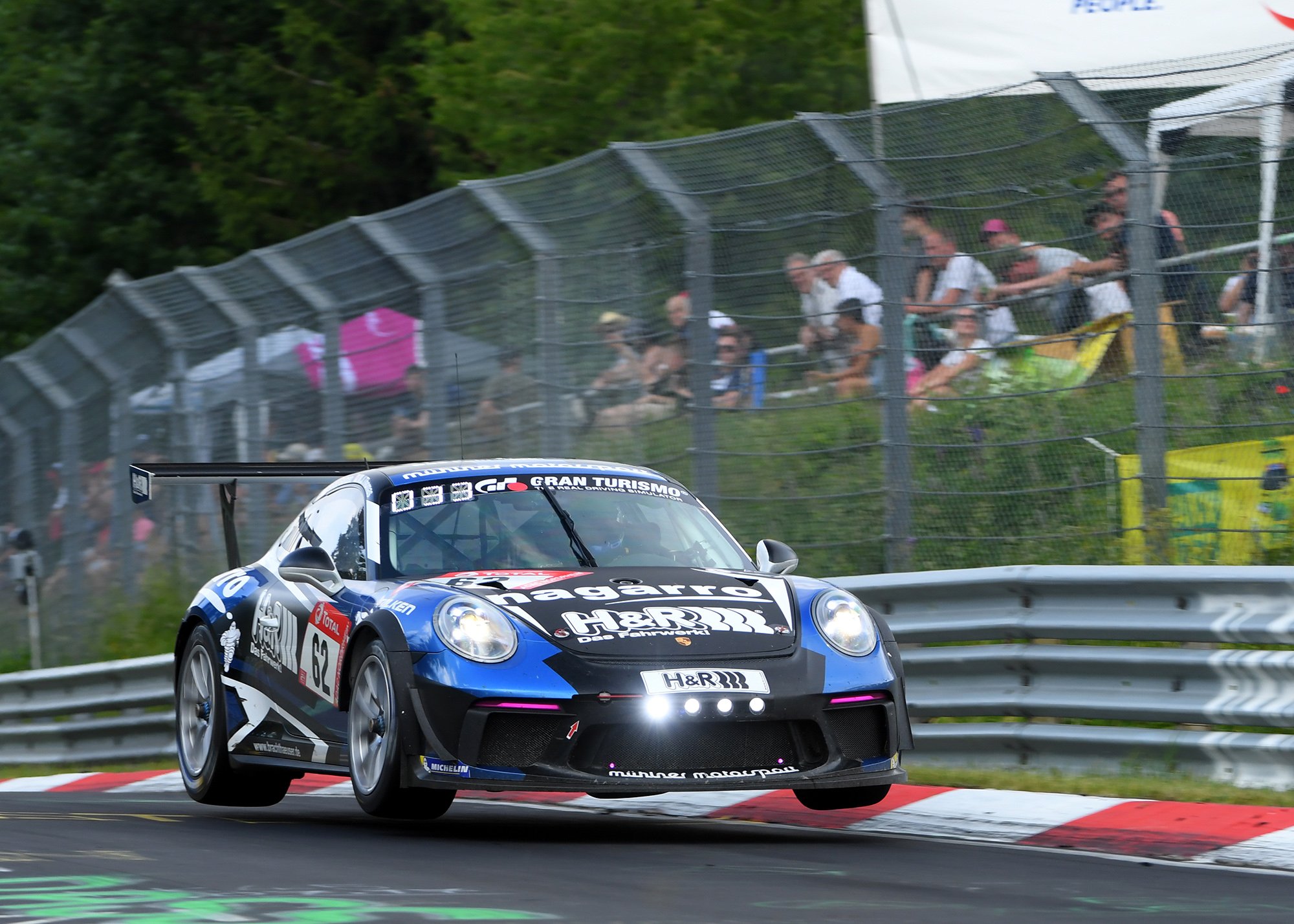 For the 3rd time in a row, Nagarro is the sponsor of the racing team.

Already during the qualifying round, the Nagarro-sponsored Porsche with the number #62 of Gartzen/Thomas/Kranz/Hoppe had prevailed and performed first class in the race. After the successful start from position 36, the team maintained the lead in its class (SP7). With the best lap time of 8:42.427 minutes and 148 laps, the Porsche team secured the sensational first place in its class as well as the 15th position in the overall ranking. Professional racing driver Sebastian von Gartzen, who took turns at the wheel with his team colleagues Mark Thomas (GB), Moritz Kranz (GER), and Marcel Hoppe (GER), enthusiastically said: “After pole position in the qualifying we started the race with high expectations, but a lot can happen in 24 hours. The GT3 Cup class is strongly occupied and sometimes only a few seconds separated us from other drivers in the race. All my teammates were flawless and consistently fast, which led to us winning the race with a lead of over 2 laps at the end!”

Our team with driver Sebastian von Gartzen fought their way up from grid position 36 (from 156) to position 15 in the overall standings. We also got the 1st place in the class standings (SP7).

16 Nagarro employees live at the circuit

“Speed and quality—this is not only essential in Nagarro’s technology environment, but it is also the decisive success factor in car racing. Blind trust, perfect teamwork, and agility help a race team as well as a team of technologists to perform to the max. I am excited that the racing team we support has been able to achieve such a masterly performance. The fact that we were able to surprise 16 worldwide Nagarrians with a VIP ticket to this event at the same time is a wonderful addition,” says Manas Fuloria, CEO of Nagarro. For the 24-hour race, 16 employees from around the globe were selected who had distinguished themselves both by their performance and their mindset. Unique experiences like visiting the pit lane or being present at the pit stop, enjoying a walk-through of all cars at the starting line or hanging out with the drivers & the team boss contributed to the solidarity of the Nagarro colleagues worldwide. This was in keeping with Nagarro's corporate credo: “To make distance irrelevant between intelligent people.”

Nagarro congratulates the entire Mühlner Motorsport team and all drivers on an extraordinary performance and an outstanding success!

Nagarro drives technology-led business breakthroughs for industry leaders and challengers. When our clients want to move fast and make things, they turn to us. Today, we are 6,000 experts across 21 countries. Together we form Nagarro, the global services division of Munich-based Allgeier SE.