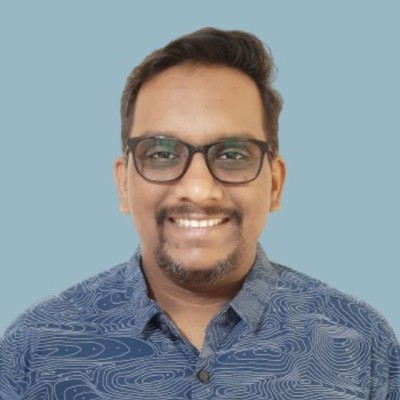 Vinton Cerf, recognized as one of the fathers of the Internet, said,

"People often take the view that standardization is the enemy of creativity. But I think that standards help make creativity possible – by allowing for the establishment of an infrastructure, which then leads to enormous entrepreneurialism, creativity, and competitiveness."

Standardization plays a paramount role in any system, having a fixed definition of how it will operate and the role of each element in the system. Imagine looking at kids wearing uniforms. Just by uniforms, you can know their school. Wireless circuits are similar. These are configured, or more appropriately – tuned to receive a certain set of frequencies and filter out other frequencies and unwanted noise. Ever wondered why the range of FM Radio is 87.6 MHz to 108 MHz only and not beyond that? Because the gang-tunning circuit in an FM Receiver is designed for a dedicated application – to receive anything broadcasted at these frequencies. If so, it is obvious why FM broadcasters are allocated to a fixed range of frequencies, one form of standardization. In the case of AM/FM radio transmissions, this standardization is regulated by ITU (International Telecommunication Union). ITU has 3 designated geographical regions covering the whole world.

In general, standardization is governed and/or dealt with by geographical regulatory bodies. The following table provides a head-start for the same: 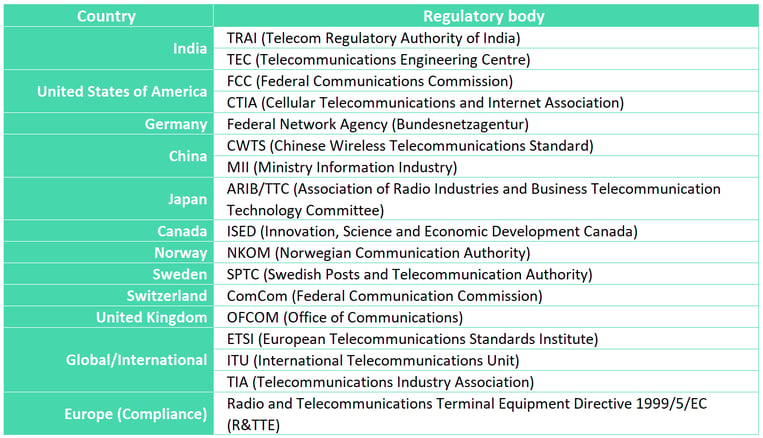 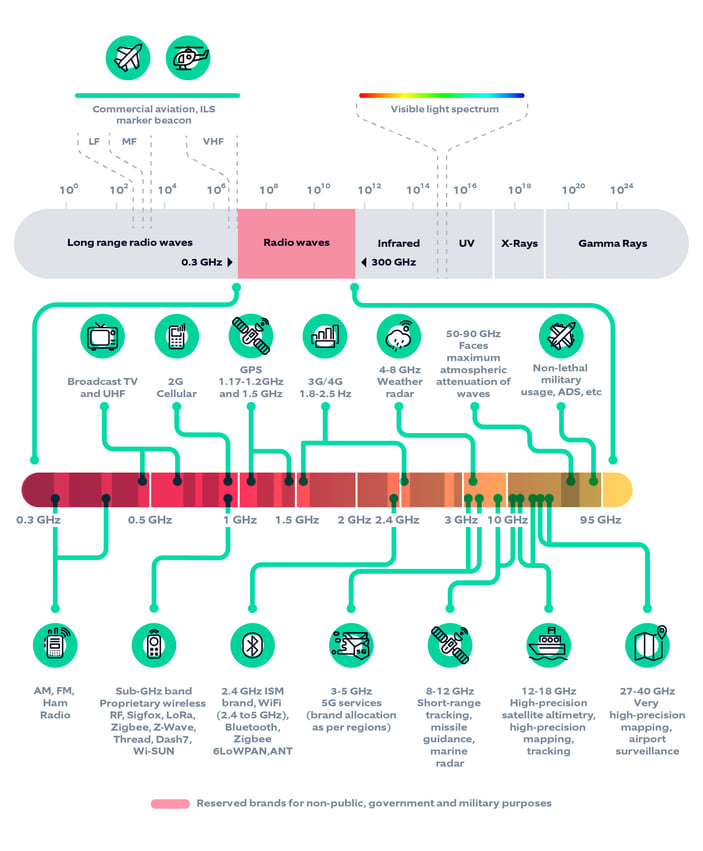 The use case of inter-dependency iterates the importance of standards in wireless communication. Suppose a company has capabilities in analog measurements and high-precision temperature sensing devices. They aspire to make this device wireless with the capability of transmitting this information on a wireless interface. If they pick a non-standardized wireless interface, they must have the capability to design an RF receiver to extract this data. Alternatively, they can seek help from expert service providers for the same but at a high cost. Instead, they can use a standardized stack such as Bluetooth or Wi-Fi for communication and develop a small front-end application to collect and display the information. With such a product model, the non-recurring engineering cost would be less, and the product would be more flexible in terms of usability. This is only possible because of standardization leveraged by Wi-Fi/Bluetooth.

Bluetooth has been accepted as a standard which is based on IEEE 802.15.1 specifications. Bluetooth operates at frequencies around the 2.4 GHz band. The onus of overseeing the standards has been on Bluetooth SIG (Special Interest Group). Bluetooth SIG comprises telecommunications, computing, automotive, and consumer electronics leaders. There are over 38000 members of SIG, assigned with different levels of membership. The promoter members of the SIG include big banners such as Apple, Nokia, Ericsson, Intel, Lenovo, Microsoft, and Toshiba. There are close to 600 associate members and about 37500 adopter members.

Until version 4.0, all Bluetooth standards are referred to as 'Classic Bluetooth.' A new technology, i.e., 'Bluetooth Low Energy (BLE)' was introduced in version 4.0. Backward compatibility is essential, and the BLE devices are further categorized for convenience. BLE Smart devices are purely supported with BLE4.0 implementation. In comparison, BLE Smart Ready is the BLE device that supports backward compatibility with Classic Bluetooth devices. So, it is natural to assume that the smartphone you are currently using most probably has BLE Smart Ready support, as you may still want to be able to connect to a Classic Bluetooth peripheral. With a broader perspective, all devices that are peripherals from a BLE standpoint, such as Sensors, Mice, Keyboards, Wearables, etc. – are BLE Smart Devices. Whereas the master of the BLE communication paradigm – smartphones and computers are BLE Smart Ready devices.

Compared with Classic Bluetooth, BLE is further standardized by pre-defined standardized Services and Characteristics. For example, you can make a BLE-based heart rate sensor that sends data in a fixed, standardized format, and you no longer need to worry about developing a smartphone app for the same. Suppose you follow standard heart rate service defined as per specification (Heart Rate Profile – HRP). You need not invest significantly in designing and developing a mobile app with a proprietary protocol. Moreover, unless an OEM desires to promote the electronic product with a proprietary mobile app, they can still design BLE peripherals without providing an app for it. In such a case, functional compatibility is ensured by BLE compliance and the usage of standardized services.

A relatable example would be an HID-based keyboard, mouse, or Bluetooth headset. The Classic Bluetooth supported the implementation of the device class to indicate the nature of the peripheral. So it is fair enough to consider that Classic Bluetooth had a certain degree of standardization for a specific class of devices. But for most cases, when people manufactured such sensors, they had to develop a smartphone application to interpret the data per their proprietary protocol.

The network router in your home mostly has Wi-Fi capability; we all know Wi-Fi operates around the 2.4 GHz band. However, it is worth noting that as per the IEEE 802.11 family of standards, apart from 2.4 GHz, Wi-Fi can also operate at 900 MHz, 3.6 GHz, 5 GHz, 6 GHz, and 60 GHz. It is just that most routers that support dual-band functions typically operate at 2.4 GHz or 5 GHz bands. Choosing the frequency band is a calculative decision, which we will explore in further sections.

Just like Wi-Fi and Bluetooth, it is also a standardized protocol. It is based on the IEEE 802.15.4 standard, suitable for communication up to 100 meters at lower data rates compared to Wi-Fi and Bluetooth. The typical band of frequencies where it operates is 868 MHz, 915 MHz, and 2.4 GHz. Did you start wondering about these magic numbers? Good, we will get to that as well.

There can be a valid use case to have a proprietary implementation for a requirement-specific Wireless RF network/system. For example, do I not want my garage door to be opened with my neighbor's key fob? This use case can be handled using standardized protocols, i.e., by means of the MAC (Media Access Control) layer and other security procedures, but it comes at a cost.

Conversely, we can design a Wireless RF communication system that operates within an unlicensed band of frequencies such as Sub-1GHz and has a proprietary implementation. There are plenty of RF modules that operate over the Sub-1GHz band. With these, the designer has the liberty to decide on the format of information to be transmitted. Furthermore, these modules are flexible with the kind of modulation to be used. For example, one can design a system over FSK (Frequency Shift Keying) or PSK (Phase Shift Keying) for reliability and range or over OOK (On-Off Keying) for low-power applications.

There are sophisticated line-coding techniques, such as Manchester codes, Unipolar/Bipolar RZ/NRZ, etc., for encoding the data. With these encodings and other lightweight payload encoding patterns, we can exchange raw data reliably over a wireless network and yet achieve a decently secure non-standardized proprietary system with far less overhead. It is not necessary that all communication happening at 2.4 GHz are standardized. Most of the technologies at that band are licensed. On the counterpart, it would also be inaccurate to say that all Sub-1GHz communications are non-standardized.

Interference at 2.4 GHz is obvious since we are surrounded by Wi-Fi and Bluetooth devices. This is where Sub-1GHz frequencies come into play. The magic numbers we usually see – 315 MHz, 434 MHz, 868 MHz, and 915 MHz are frequency bands that are below and around the 1 GHz frequency mark. The trick is using these frequencies as these are not used in most computers, smartphones, etc., which in turn helps to make the system less prone to interference due to nearby devices.

Since there is no strategy to control bandwidth utilization, it is prone to creating chaos. To tackle this, the power levels are defined for all wireless communication bands by the regional regulatory bodies. Such equipment is also subjected to EMI/EMC testing, which scrutinizes the emission levels. Furthermore, the restriction on wavelength is also imposed to make sure that interference remains negligible and that all such devices can co-exist.

Many other standardized protocols are operating at the Sub-1GHz band, such as GSM, Sigfox, Thread, Z-Wave, LoRa, etc.

GSM has predetermined bands allocated based on the region of operations. Sigfox, Thread, and Z-Wave operate at frequency bands around 800-900 MHz, whereas LoRa is a pure Sub-1GHz RF Communication that operates at licensed frequency ranges in the UHF band, for example, 433-434 MHz in ETSI compliance, 868 MHz in Europe, 902 to 968 MHz in the US and 778-787 MHz in China.

The trade-off between 2.4 GHz and Sub-1GHz

We can chew over this matter enough to realize that this is not the debate that will ever settle. Like many other cases, the decision to choose the right wireless RF band is mostly driven by requirements.

As I said, we are still at the tip of this colossal proverbial iceberg! Suppose you choose to walk the path that can further riddle your mind. In that case, it is worth thinking of these RF technologies with respect to implementation-level details such as type of modulation, bandwidth utilization, interference management, antenna design, power optimization, security layer, and Man-In-The-Middle (MITM) protection from external attacks (like eavesdropping). Furthermore, compliance engineering for Wireless RF technologies can be an intriguing topic to study.