Realm of Wireless RF communication - All you need to know 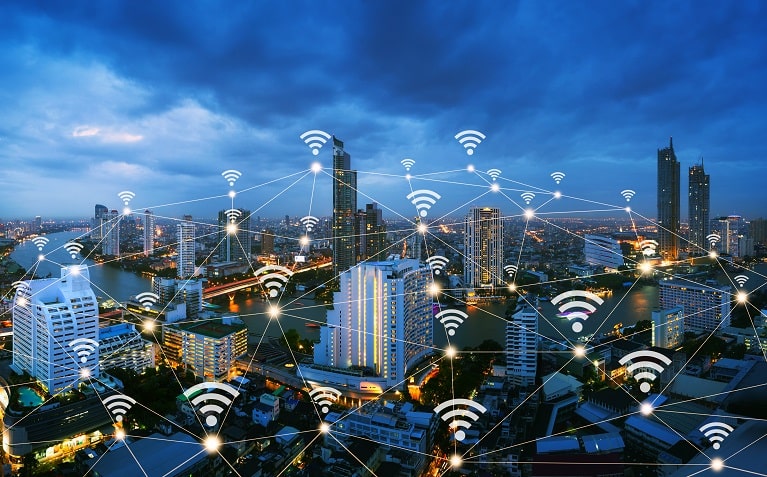 The importance of the term ‘Communication' has expanded beyond the sociological aspects of our lives. Technological advancements have blown away the shackles of human-originated communication and have set communication as an inexorable element of our lives. Furthermore, the transition from Wired to Wireless communication opened an alternate point of view with boundless potential outcomes. Since then, everything – such as home internet, Direct-to-home, music systems, or even a light bulb has transitioned to a wireless mode of operation. At present, we are girdled by wireless technologies. And for that, we owe a lot to gentlemen – Nikola Tesla, Heinrich Hertz, and Guglielmo Marconi.

As kids from the pre-internet era, we all have been curious about how a Television works with a roof-top Yagi antenna. Some of us may even have had experience with the little magic we used to pull off when we adjusted our T.V. antenna turn-by-turn. Of course, The Beatles, cartoon shows, football, and cricket were more important and not the assiduous technology behind the broadcast we received. As time progressed, wireless communication became a paramount part of our lives. However, it is still an abstracted technology to an extent, probably because we cannot fathom the gravity of what it offers and what makes it work. We have witnessed the transition from wired telephones to cordless phones and mobile phones. Or those rotary knob-based television sets to Infrared-based TV remotes and, furthermore, Smart T.V. with casting devices operating over a home Wi-Fi connection. However, this is the tip of this proverbial iceberg. Wireless technologies have the potential to create an unseen impact on our lives. If you have a business, you can think of many wonderful ways to make the best use of several types of wireless communication. 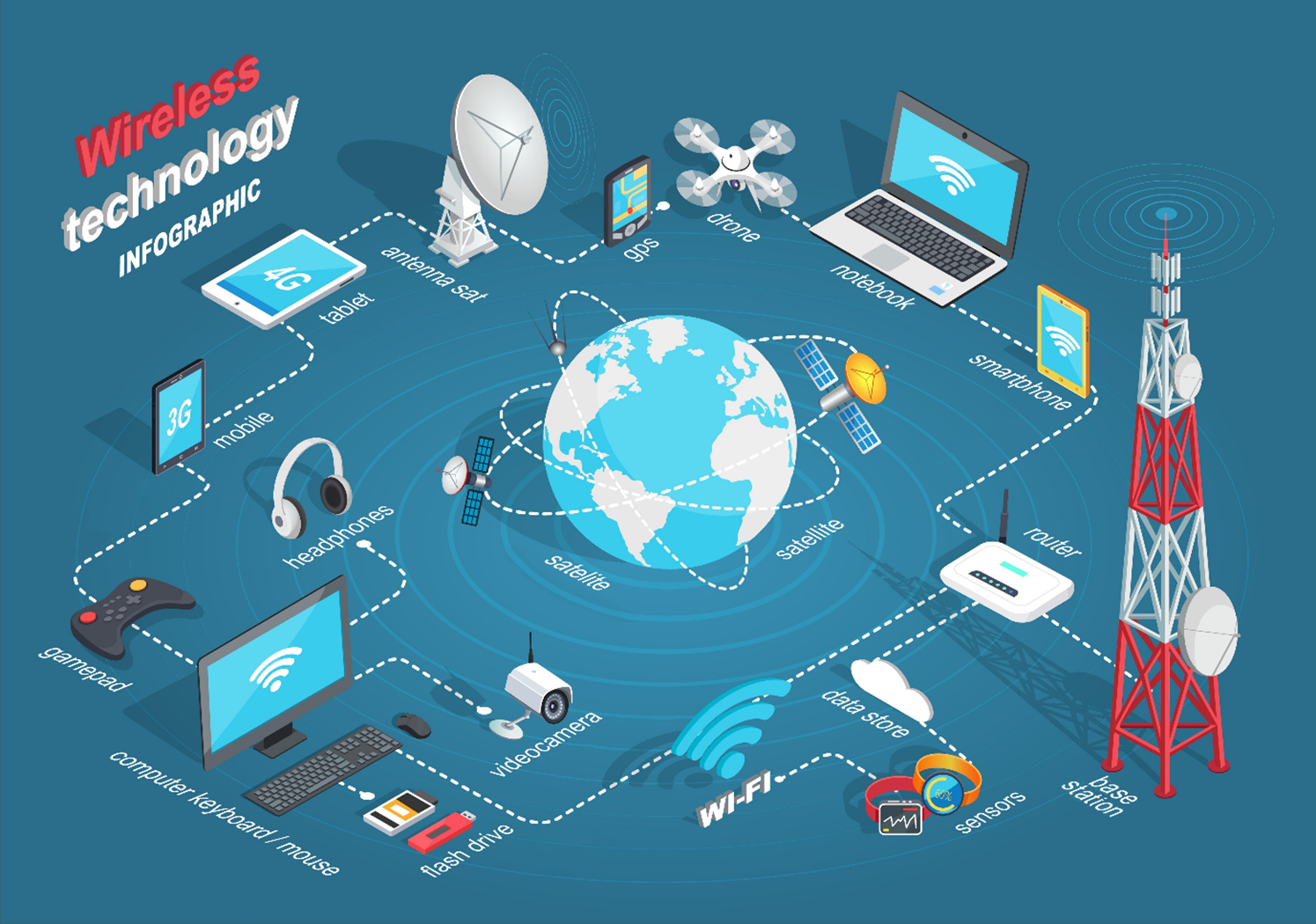 The technical jargon can confound one when it comes to Wireless and RF technologies. Technology experts often get bandy about ISM, VHF-UHF bands, 2.4 GHz frequencies, Narrowband, Wideband, Ultrawideband, etc. In such a conversation, many dilettante efforts are seen to go in vain. This raises a pertinent question – "Is there a simpler explanation that lays out things in an understandable manner?" The short answer would be yes; however, it leads to a few questions.

RF is an abbreviation for Radio Frequency (or Frequencies). RF communication can happen over Wireless or Wired media. Yes, Wired RF is still a valid term. Any signal that has been modulated and has a carrier frequency lying between 3 kHz to 300 GHz is a Radio Frequency signal. If you have a wired conductor capable enough to transmit this signal with acceptable attenuation accuracy to a distant receiver, you have Wired RF Communication. You may have used T.V. Sets with an RF cable running from a Direct-to-home antenna to the set-top box or T.V. Set.

Suppose you design a system capable of transmitting the same signal through the air to travel as electromagnetic waves and being received using an antenna at a distant node. In that case, it is a Wireless RF system. To dig deeper, VHF (Very High Frequency) is a band of frequencies between 30-300 MHz. Anything above 300 MHz up to 3 GHz is UHF (Ultra High Frequency). If we get our math right, all 2.4 GHz can be called UHF Communication. The ISM radio bands are portions of the radio or RF spectrum reserved internationally for industrial, scientific, and medical (ISM) purposes. They are the backbone of most wireless RF communications happening today.

We can now relate this more to the daily equipment to better understand topologies. An exchange of an SMS is an example of one-to-one communication, more popularly known as Point-to-Point communication. When you tune in to your favorite radio channel, most of the time, you will listen to the content right away. It implies that regardless of whether anyone is listening to it, the radio channels keep Broadcasting. That is an example of an unacknowledged wireless broadcast.

When you have a wireless router at home, only specific devices can connect to it, meaning – it is managed and acknowledged wireless communication. A more relatable example would be T.V. systems in public areas. You must have seen televisions at an airport. Such a system transmits the same video signal over a wireless interface to multiple wireless televisions sets installed at various locations in the airport. This is called a multicast arrangement. Based on the area covered by wireless communication, topologies are categorized into the following:

When seen from a broader perspective, we have come a long way with RF Wireless systems. We have upped our game from just Home Automation systems all the way to IoT (Internet of Things) or even IIoT (Industrial Internet of Things).

Almost every piece of electronics that we are using has gotten smarter. We all know about traditional wireless systems that have been there for decades, such as Wireless Communication Systems, Amateur/C.B. Radio, Television/Radio Broadcasts, etc. However, things have become more intriguing over the past two decades. Let’s look at some examples that can help us comprehend the widespread usage of wireless RF.

Along with frequency specifications, we also come across many terms relating to network and/or service, such as bandwidth, congestion, etc. For example, overwhelmed local transport and busier streets indicate that lot of people are commuting at the same time.

Most services need some means of governance to manage supply and demand. Our local authorities have control over the supply and demand of water and we can tap into a monitored amount of water. When we use roads, we follow certain traffic rules; the same applies to aviation – it does not mean that they fly randomly. They must follow specific regulations that decide their cruising altitude, speed, etc.
Governance of the Wireless RF spectrum is a challenge but is well-established today. Imagine a safety-critical scenario – Commercial airplanes land using multiple methods. Some of them involve a visual approach with windspeed and visibility information received from ATC (Air Traffic Controller). When visibility is not adequate, mishaps can happen. To overcome the human-error factor from such an exigent task, ILS (Instrument Landing System) was invented. ILS relies on an airplane’s built-in controller/computer, which processes the Marker beacon broadcasts at certain distances from the runway. These wireless broadcasts originated at certain nodes placed to break the whole distance into segments, more popularly known as Outer Marker, Middle Marker, and Inner Marker. Marker beacons broadcast a morse code at a predetermined frequency, which aids in determining the position of the airplane in the glide path derived by ILS. Regulatory bodies have marked the bands of frequencies used for such critical systems as reserved frequencies.

Knowing which frequencies can be used is paramount when designing a wireless system. In a nutshell, all the devices in the network must follow certain protocols to utilize this resource we broadly call the spectrum effectively. Licensing and standardization are means to comply with these rules.

2.4 GHz ISM band is known to be unlicensed for public usage. If you enable a Wi-Fi hotspot, create a mesh of Bluetooth devices, or form a Local Area Network with your Wi-Fi devices, governing bodies will not fret about it. Why? Because the footprint of such setups is negligible from the governance point of view. However, the instruments that are part of such a Local Area Network are certified even though the band is unlicensed.

When you plan to implement something that has base stations, and miles of range of communication, it is concomitant to Wireless Metropolitan Area Networks, which require governance and licensing. Licenses can be interpreted as means of clearances to transmit information issued based on compliance testing. The trivial question remains – “Who owns this onus to comply?”. It is the responsibility of the RF device manufacturers. For instance, the internet routers we use have a list of compliance standards. The other way to leverage standardization for interoperability is using any standardized technology such as IEEE 802.11 as a backbone. Unless we do that, getting the radio equipment certified with the relevant governing body for wireless communication becomes too complicated. If the product is designed for international usage, it should comply with apex bodies in respective regions and compliance such as UL60950, IEC60950, FCC (Federal Communications Commission) Part 15, R&TTE, etc.

The team responsible for designing a product with wireless communication/interface is a crucial cog in the wheel. They must pay heed to parameters such as reusability/knowledgebase for software and hardware design, ease of compliance, performance, power consumption, battery-life estimation, etc. It boils down to the point where enough brainstorming and analysis are done and backed by testing data to identify the most suited wireless technology from the many available options.