This is a non-exhaustive vision derived from various engagements in and around automotive industry clients, from large auto-OEMs to digital start-ups. Though not carrying exact timelines, all technologies and business models anchor in existing science or research – when not live already. 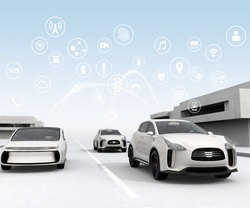 The largest part of value creation is shifted from vehicle construction, sales, and maintenance to digital services delivered in and around the vehicle, meaning better “transport” for human beings and goods. The autonomous drive is well-established and in the case of need for sheer driving pleasure (a brand claim explaining it well), it can be driven manually. This also in the case of emergency – though algorithms drive a lot better than humans – as they continuously improve via deep-learning, have an advanced sensory equipment and moral compass.

The shift to self-driving is stepwise via assistance systems so vehicles and drivers can get used to it in a stepwise approach. Moreover, the needed moral and legal environments can be established in time. The more secure cars get (and this is one of the side-effects of this development), the less insurance fee is required, as self-driven cars suffer from higher rates and taxation. Zero-emission cars flow in large cities first, pushing back more and more combustion engines cars, and reach smaller cities soon after. The step after zero-emission is cars that are even cleaning the air, electric superchargers along all major roads ensuring quick-charges on the trip for free, even in the inductive way or with rolling charging robots (like an aircraft refuels when flying).

Cars are highly interconnected between each other or in central computing units constantly exchanging conditions of other vehicles, roads and infrastructure and their users, in anonymized way. Real-time warnings on e.g. ice, aquaplaning are delivered and shared as well as information on free parking lots, for instance, is shared. Any change in the roads-setup like new signage, construction areas, and weather conditions is monitored by the cars fleet and constantly updates a digital twin in almost real-time. This data flow is the source for various additive services like agriculture-optimization, energy optimization for street lighting - even violence surveillance can be supported by cameras in cars (big brother is always watching you). Street view is updated seamlessly and as autonomous cars carry IR-sensors as well, various models for optimization of e.g. energy consumption tracking of buildings or the check of average human body temperature for disease-control are possible scenarios. Personalized data can be extracted, in anonymity of course, by let’s say the police officials for post-analysis in cases that require such information. Traffic lights are irrelevant, these are not needed as cars communicate directly. Even when cycling or walking, you can be part of that ecosystem.

Ownership of these data streams obviously is the new oil for the next century and is the nutrition for a lot of disruptive business models.

Now, what happens when we add car users and their digital halo into the picture?

The cars are highly interconnected in their user’s lifestyle and daily usage patterns. So the vehicles not only are pre-warmed before the user enters but already fully loaded with the destination and route data from the user’s calendar. As users mainly have “spare time” in the car, the usage of that is where service providers compete for; either in an advertisement model or by delivering paid subscriptions or services. For example, large screens can be sponsored by specific abonnements for movie or entertainment streaming. This can also include routing – the fastest route might cost an extra premium and a route including a few ad-partners could go for free. The mobility advice delivered can include multi-modal platforms comparing public transportation options, in addition, a lucrative business model for some players previously delivering roadside assistance before their transformation. In case, the number of passengers or luggage seems to exceed a limit, a recommendation for private or public car-sharing or rental is provided and managed in an instant. Of course, private cars can be switched into this mode when not being used while for instance being on vacation or in a restaurant. These types of cars are organized in virtual fleets and their purchase power is bundled e.g. when a re-purchase of a car is being negotiated with an OEM.

Advertisements are highly individualized and creative thus are not as annoying as in the 20th century. They are shown in-car or on advertisement panels along the road or later in retail stores. Auctions for specific ads are replaced by auctions for routes now to ensure the right audience alongside purchase opportunities. This influences routes and timing of individualized messages. Of course, it is possible to purchase “banner-free” trips. Most of the purchase activities could be done by the car in autonomous mode, thus e.g. once the purchase list of the fridge is approved, the car can make its way.

Entertainment systems are sponsored by content providers, so instead of purchasing the “online entertainment package”, you purchase the large Family Netflix pack. They come along with optimized screens to maximize exposition to it (and its advertisements). Virtual Reality can transform the entire boring ride to school into a trip through Death Valley jungle (depending on your mood and how you want to prepare your spirit). Of course, all personal apps and abonnements follow the users through the cars they use. It is expensive to acquire space in these app collections and it is only affordable for the largest platforms – they dictate prices to their suppliers to become present in these ecosystems.

Having a look at the vehicle-lifecycle, cars are either manufactured in central production plants(which is efficient) or in a decentralized way, close to the users and their individual needs in small garages. A lot of parts are standardized and the number of variants is massively decreased. However, individualization is important. With deliveries done by local small garage shops, we welcome back the age of coach-manufacturers. A lot of features are delivered as software updates and paid in an Abo-Pass way. Freemium is in place and several features can be tested prior to purchase (or rent). Cars organize their maintenance on their own. They schedule when not being used, auction the service, interconnect to bundle purchase power e.g. for spare-parts and accessories as well as standard services. Transparent vehicle markets constantly re-evaluate the fair market prices of vehicles and provide current market price to the users. Thus, a recommendation on when and how to sell the car can be drawn automatically.

This is an extract of ideas for the future of that industry – showing it is in the middle of a massive transformation. Having and developing digital skills is the DNA of future success. Agility is an essential instrument to sow the right ideas today and to grow the cannibals of the own, current and tomorrow’s may be disrupted business model in-house.

The case for automation in pharmacovigilance

Maximizing the impact of sales enablement with automation