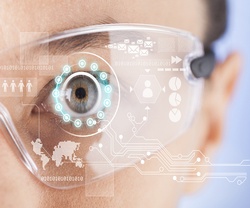 Gartner recently published its Hype Cycle for Emerging Technologies 2016 and among many interesting findings, two have caught my attention - the first is assisted reality which is slowly leaving the trough of disillusionment to join the second technology - 'virtual reality' on the 'slope of enlightenment' where enterprises start discovering more practical applications to benefit from, where second and third generation products appear on the market from technology providers and where more projects are funded. However, for the latter two Gartner still expects another 5 to 10 years to go before these become mainstream. This analysis reaffirms my belief in that Nagarro’s recent 'Assisted Reality' initiative, which is well-founded. Nagarro has been selected to participate in the Google Glass at Work partner eco-system and has signed a partnership with Upskill (Formerly APX Labs) recently, one of the few Google Glass certified partners. Together with Upskill (Formerly APX Labs) we are preparing for a joint European customer event on 'Assisted Reality' in Q1/2017 under the Google and Intel umbrella.

In terms of wearables technology, there are countless buzzwords floating around. Let us look at some clarifications and state some key definitions for assisted reality, virtual reality, augmented reality, mixed reality, and many more 'realities'.

Assisted reality is the concept of projecting additional information into your field of vision. A good example can be head-up displays in premium cars. With this kind of equipment you look through your windshield and see a seamless projection of your current and allowed speed as well as navigation instructions such as where to turn next. Once you get accustomed to it, you always want it around because you can concentrate on the traffic without looking at other screens and indication instruments. Though this technology is not completely new – it has been used for decades in military fighter jets, it is now affordable to a broader public.

In the example described above, a fixed mounted projector is used as an assisted reality device. But many other devices are available now, such as smart glasses and mobile devices. Smart glasses from Google, Vuzix, or Recon Instruments (recently acquired by Intel), do the same. The only difference is that they are mobile based. You wear the smart glasses and get the information you need while your head stays up. No need to look at your computer or smartphone. Other variants with devices like smartphones or tablets use the camera. You look at an object through your device (camera) and the system behind is able to recognize the object and able to display additional information such as navigation instructions and maintenance hints.

Augmented reality is often used as a synonymous term to assisted reality (and shares the same acronym), but I would extend it beyond just displaying additional information. It renders 3D objects in real time into your field of vision. For example, looking through the cover of a machine and seeing its internal component structure. In other words, 'augmented' information is much more sophisticated. A typical example, you may have experienced recently from the gaming domain is Pokémon GO.

Augmented reality can be delivered by the same devices as mentioned above - mobile smartphone or tablet devices and smart glasses, however the hardware requirements on rendering performance are much higher in comparison to assisted reality.

Virtual reality differs much more from assisted/augmented reality. The basic concept is to show you a computer generated virtual world which comes as close as possible to reality where you can immerse yourself and even move around. This requires high rendering computing power. Traditionally, virtual reality can be visualized using computer displays, but nowadays special headsets are used. Most famous vendors of virtual reality equipment are Oculus Rift (acquired by Facebook) or Samsung Gear. They require sensitive sensors to follow your head movements and position. This is applicable to gaming, simulations or for visualization in construction projects.

Mixed and merged reality are combinations of virtual and augmented reality where real and virtual reality is merged or intermixed. Microsoft’s recent product HoloLens is able to display holographic content into your reality. Intel’s product 'Alloy' is another example where real and virtual reality are 'merged' in a headset device with sophisticated integrated 'real-sense tracking'.

Imagine you are visiting the famous Colosseum in Rome. With assisted reality you would look at it and get historic data, like when it was built, how many people it could accommodate, etc. With augmented reality you would look at it and the missing parts would render in 3D, so you can view how it looked like back in Roman times. With virtual reality you will wear a special device and see a virtual Roman Colosseum and a simulation of 'gladiatorial fight' and maybe even engage yourself in the arena.

Nagarro’s strategy and plans for '* reality'?

Nagarro is not new to these '* reality' technologies. A few proof of concepts have been implemented at here. But now is the time to approach these technologies in a much more systematic way under the umbrella of the 'Industry 4.0' practice. We will concentrate in the first step on 'assisted reality', as it promises the most obvious benefits to a 'connected workforce' in field service, manufacturing or material handling. With smart glasses you could – as a non-exhaustive list:

This way we bring a lot of innovation to our customers. The first discussions show a substantial interest in our 'assisted reality' initiative.

Besides the preparation for the assisted reality event in Europe backed by the marketing power of Google and Intel, we have started a technical training program with our partner Upskill (Formerly APX Labs) and have also prepared an 'assisted reality mobilization kit'.