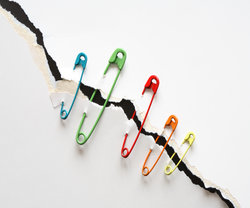 'Disruption' is the most dreaded word for any CXO nowadays. Every CXO is worried about his/her industry being disrupted by a new player - probably by a tiny startup. Most startups claim they have a new platform that will disrupt the industry. And in this atmosphere of fear several industry trends are going haywire. Business models are taking major U-turns. For instance, brick and mortar stores are getting desperate to make their online presence felt and are creating their virtual stores and apps. On the other hand, online only stores are looking at setting up their own physical stores.

There have been many cases of disruption in almost all business domains in the past few years - from Facebook to Airbnb, Amazon to Uber. The disruption has not only made incumbent companies vulnerable, but has got everyone else running scared as well.

Some are trying to fight back and figure out how to 'disrupt the disruptors'. Google tried to disrupt the disruptor in the social networking space, by creating Google+ and going after Facebook. We all know how that turned out. Facebook however has been smart in fending off potential disruptors by adopting a simpler strategy - acquisition. Facebook bought WhatsApp when they proved pure messaging can be a social platform and also acquired Instagram when they showed sharing images from mobiles is a popular social use case.

So the question is  - Are you losing out to disruptors? More importantly, is there a way to protect your business from being disrupted? And should your 'normal' business focus on causing disruption now?

For that it is important to understand the different types of disruptions. Theories on disruption have existed for almost 20 years, since Clayton Christensen published The Innovator’s Dilemma in 1997. In recent times, we have stretched the definition and CXOs have created their own strategies.

This is caused by innovations that disrupt the customer demand patterns. For instance, a new entrant or a startup develops an innovative product that is initially attractive only to a small segment of customers, mostly the low-end customers.

The current big players typically neglect the low-end customers and focus more on the high-end ones, thus creating a gap between the demand and (subpar) supply. The new player – ‘the disruptor’ may have a limited budget and resources, which means that their product or service underperforms as compared to other mainstream products. Customers may reject the innovation from the startup, but as it improves rapidly with features and performance dimensions that users care about, slowly (or sometimes even rapidly) customers begin to embrace the innovation and the new entrant becomes a real threat to leading businesses.

Demand-side disruption typically happens one customer at a time. Nokia went from being the world’s dominant and pace-setting mobile-phone maker to holding just three percent of the global smartphone market. They were slow to react to change in the telecommunications market, which was taken over one customer at a time by the likes of Apple and Android. Similarly, Kodak did not lose the film business because one day nobody wanted film cameras. They lost the film camera market one photographer at a time as they found alternatives in the form of digital photography. In the initial days of digital photography the quality of photographs was worse than that of analog cameras, but customers didn't care, they still jumped ship. Likewise, all the Orkut users didn't migrate to Facebook overnight. Orkut lost them one user at a time and when Facebook started their product was neither that stable nor feature rich compared to where it is today. Nevertheless, Orkut failed to react and recapture.

From the incumbent player's standpoint, if it's a big company, it has only a limited window to react and build an effective defense strategy. In many cases, the established player ends up buying out the new entrant or creates a smaller sub-unit to counter the startup. The main reason why an established company with a sluggish process fails to react to the threat is that they are not agile enough to respond to a lean startup. In several cases, the architecture and the design of the product or service does not allow it to be changed so rapidly. If the incumbent has an agile process and an enterprise class architecture to go with it, their chances of fighting off smaller disruptors will be very high. Simply put, they need to be Enterprise Agile.

Supply-side disruption
Supply-side disruption happens when a new innovation or technology offers a better way of providing consumer value than the existing technology does. The entire evolution of computers from Mainframes to PCs to tablets and mobiles have followed this paradigm. Every year newer technologies have come up and the computing landscape has been disrupted a bit. When Flip digital camera was bought by Cisco at close to $600 m, they were the trendsetters. But, in a span of two years it changed. The digital camera technology evolved and iPhone put a 'free' digital camera inside a phone. Flip went down faster than the Titanic. Garmin and TomTom were once worth $40 bn together and then smartphones started bundling GPS for free.

For a company it is usually difficult to guard itself against supply-side disruption. Sometimes development teams specialize so much that they find themselves in silos. This leads to slow response to changing customer requirements or changing technologies. Some companies keep rotating technologies across different verticals just to mitigate this risk. The key to staying ahead of the rest is to invest in innovation. Setting up technology specific Centers of Excellence, creating Innovation Labs are common practices in many organizations to guard against supply-side disruption.

It is probably fair to assume that the next disruption will involve a mobility solution and hence having a good mobile strategy is important. CXOs need to have a well-defined strategy in place to guard against any disruptions. Having a specialized partner who can guide them in innovation and show them how to be Enterprise Agile will surely help.

Are you falling prey to the enterprise agile transformation trap? 5 common pitfalls to avoid