industries
Explore how digital product engineering can transform your industry.
view all industries
services
Accelerate your vision with technologies that are both agile and cutting-edge.
view all services
insights
Explore the thought process and insights of our experts.
view all insights
blog
CARING@Nagarro: Mansi Gupta on being ‘CARING’
Sabrina Floh
blog
Building a design system from scratch
Cody Cai
events
30 Jun, 2020
Enterprise agility in the time of COVID
more information
About
nagarro
Discover more about us,
an outstanding digital
solutions developer and a
great place to work in.
About us
Investor
relations
Financial information,
governance, reports,
announcements, and
investor events.
Nagarro IR
News &
press releases
Catch up to what we are
doing, and what people
are talking about.
News center
Caring &
sustainability
We care for our world.
Learn about our ESG
initiatives.
Learn more
Thinking about
becoming a Nagarrian?
get to know us

Performance Improvement for HashMap in Java 8 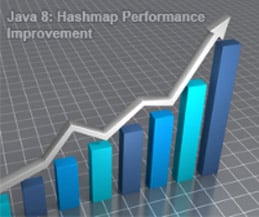 In our last post, we discussed the top five momentum builders for adoption of Java 8 in enterprises. In this post, we will dive deeper into JDK 8’s new strategy for dealing with HashMap collisions. Hash collision degrades the performance of HashMap significantly. With this new approach, existing applications can expect performance improvements in case they are using HashMaps having large number of elements by simply upgrading to Java 8.

Hash collisions have negative impact on the lookup time of HashMap. When multiple keys end up in the same bucket, then values along with their keys are placed in a linked list. In case of retrieval, linked list has to be traversed to get the entry. In worst case scenario, when all keys are mapped to the same bucket, the lookup time of HashMap increases from O(1) to O(n).

Java 8 has come with the following improvements/changes of HashMap objects in case of high collisions.

Above changes ensure performance of O(log(n)) in worst case scenarios (hash function is not distributing keys properly) and O(1) with proper hashCode().

In Java 8, HashMap replaces linked list with a binary tree when the number of elements in a bucket reaches certain threshold. While converting the list to binary tree, hashcode is used as a branching variable. If there are two different hashcodes in the same bucket, one is considered bigger and goes to the right of the tree and other one to the left. But when both the hashcodes are equal, HashMap assumes that the keys are comparable, and compares the key to determine the direction so that some order can be maintained. It is a good practice to make the keys of HashMap comparable.

This JDK 8 change applies only to HashMap, LinkedHashMap and ConcurrentHashMap.

Based on a simple experiment of creating HashMaps of different sizes and performing put and get operations by key, the following results have been recorded.

2. HashMap.get() operation with broken (hashCode is same for all Keys) hashCode() logic 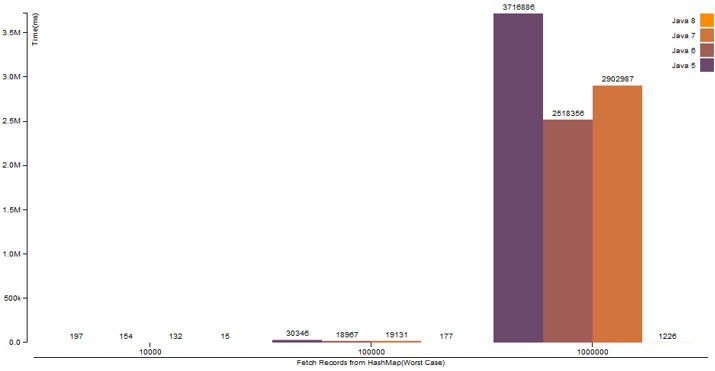 4. HashMap.put() operation with broken (hashCode is same for all Keys) hashCode() logic

The above experiment demonstrates the power of this changed approach in improving the performance of existing Java applications. While this is an internal detail, simply upgrading to JDK 8 from older JDK versions will allow certain applications to see performance improvements if they use HashMaps heavily and have a large amount of entries in the HashMaps.

In our next post, we will discuss the use of lambda expressions in Java 8 for applying functional constructs.

Or check this related insights

Energy 4.0: A smart ecosystem for E&U companies of the future

1 of 4
1 of 4
2 of 4
3 of 4
4 of 4
skip
Hi!
I'm Ginger.
l’ll make sure your message reaches the right person. Just need you to answer some questions before.
What is your name?
Why do you wanna talk with us?
select a reason
Business
General
Job seeker
Interested in joining us? Visit our careers page to view job opportunities. For other job related queries, click next.
Perfect, could I also get your email please?
Is there anything you want to tell us about your request? Some additional details?