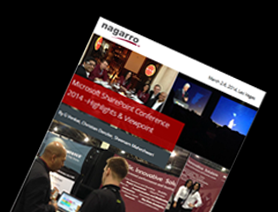 The recently concluded Microsoft SharePoint Conference 2014 was exciting, ground-breaking, and satisfying. It was for the first time that Nagarro was a sponsor and exhibiting at the conference. We received good traffic at our booth and met some very interesting prospects. Nagarro also showcased its SharePoint assessment tool called Share Assess which received a very positive response from the visitors. We also used the event to explore opportunities for partnerships with other vendors in this space.

Participating in several Executive Roundtable Discussions gave us the opportunity to hear leaders from various industry verticals voice their opinion on the new features as well as the challenges facing their existing SharePoint strategy and investments. Integration, Identity Management, User Adoption and Migration to SharePoint 2013 and Office 365 remain the key challenges for most companies.

No major product release was the cornerstone of this year’s conference, but Microsoft showed a clear commitment and a broad set of enhancements towards a more open, cloud focused product strategy with its key services – Office 365 and Yammer.

“Work like a network” was the key message from the keynote.

Some of the main announcements are:

To learn more about the conference highlights and how it would impact companies’ SharePoint investments in the near future, you could download the complete summary paper here.

Yammer vs SharePoint Social: The right tool for you