Imagine an application with many functional/business flows and external interfaces. From a quality assurance standpoint, testing countless business flows optimally can be challenging. The chances of missing a step in a given business flow are high as well. To test such applications in a reasonable amount of time, an innovative test approach like model-based testing will assure effective results.

What is model-based testing?

Model-based testing is an approach where test cases are automatically generated from application models. It is a modern software testing approach that uses a secondary, lightweight implementation of a software build which is called a model. Ideally, this model is an abstraction of the real-world function and exhibits the expected behavior of the system under test. Complex systems are generally presented by UML sequence diagrams, source code, etc. In this approach, the source code and UML diagrams can be modeled in a mathematical model called the state transition machines/diagrams.

Let’s take the simplest example of modeling an application. Imagine you are at the login page of a web application. As a user, you can either login (one state) or go to the forgot password (second state) option or choose to reset the password (third state). The user can come back from the second state and the third state to the first state. This flow or sequence can be modeled in the state transition diagram. This can become the simplest model for a login scenario. Similarly, there could be multiple models for the entire application with several permutations and combinations of the user and data flows. All the various models of the application are then interconnected. 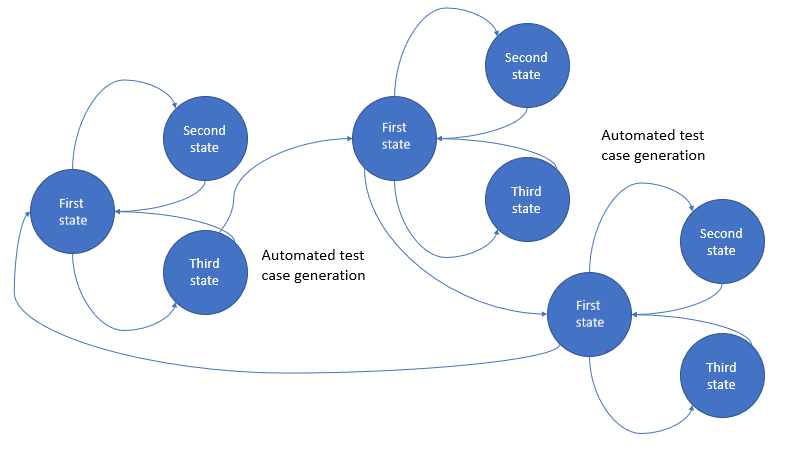 Interconnected model of an application

Once the state transition diagrams/machines are ready, the automated validation tools are used to validate different permutations and combinations of the functions and data flows. The automated validation tools generate the test cases from the state transition diagrams/machines automatically. One example of such tools is fMBT, developed by Intel, that can automatically generate test cases from models written in Python language. fMBT not only focuses on automatically generating and executing tests but also on enhancing the overall test coverage. Graphwalker is also one of the many tools that can be used to create test cases automatically. It is an open-source model-based testing tool. Graphwalker simplifies the creation of test cases by using graphs. Based on the graphs, it generates a path which is used to design test cases. TOSCA is another renowned tool that is designed for model-based testing. It allows testers to create test cases by modeling the application.

One of the most significant advantages of model-based testing is that it optimizes the software testing time and cost. To further make test execution more efficient, the automated validation tools access the shortest possible path from the start point to the endpoint. Automated test case generation and execution makes the overall testing solution more efficient and less error-prone. Another advantage of model-based testing is that it generates a minimal number of test cases to validate a given functional or data flow to ensure that the system under test works flawlessly and never does anything undesirable. The minimum number of test cases further result in cost optimization for testing.

One of the biggest drawbacks of model-based testing is the steep learning curve for testers. The testers would need to understand this concept as well as learn about modeling and coding. Another disadvantage is the model creation aspect. Modeling is a challenging task and requires a deep understanding of the application architecture. A wrong model may lead to inaccurate test cases and hence, wrong test execution. It is critical to get the model right in the first place.

The model-base testing approach is a way of generating a mathematical model from source code, from which a proof of correctness and a minimum number of test cases can be produced. The bottom line must be to ensure the system behaves as desired and never does anything unexpected.