The agile retrospective: How to build a happy, competent, and successful scrum team? 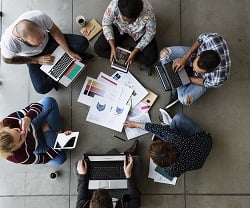 Agile teams have made retrospective meetings a standard as they are the cornerstone of inspection and adaptation for every organization. Given the right environment, retrospectives can empower a team to share hurdles honestly and openly. The actions coming out of a retrospective can be communicated and performed in a subsequent iteration, and this makes retrospectives an effective way to make short-cycled improvements.

A common perception is that retrospectives are all about the same old plus/minus topics every time, wherein the same old concerns are raised. For instance, “It’s under review.” Or “Communication needs to be improved.” Or, sometimes, it could be blunt responses like “Everything went well.” or complaints like “The story was not completed as it was dependent on Person A’s story which was not carried out on time.”

The outputs of retrospectives are generally more likely to be complaints, questions, or general ranting or blaming, which make the retrospective more of a fishing expedition. Further, some team members are hesitant to speak their mind in these meetings, at times out of fear of backlash or due to a lack of proper communication skills. For some teams, retrospectives are turned into an opportunity to settle personal scores, while there are some scenarios where the scrum master negatively influences the retrospective. Some individuals have a different take on retrospectives, where they find their feedback being ignored sprint after sprint till they reach a point of considering retrospectives as a futile activity.

How to improve your team retrospectives?

Retrospectives, when executed correctly, can serve as one of the most effective mechanisms for boosting team performance and productivity. By focusing on teamwork, collaboration, and their way of working, teams can become more agile and productive and deliver high-quality products with reduced costs and lead times. For instance, say one team member found that while working on a new story there were some new errors/bugs encountered in other parts of the application, he or she will end up consuming a lot of time to solve them, thereby decreasing the throughput.

In a retrospective meeting when such issues are highlighted, we can often plan for them. In due course of time, the team will become adept at handling such issues. Let’s take another instance where you recently implemented the latest technology in your system as a proof-of-concept. Only one person knew about the ins and outs of the installation and its operation, which created a bottleneck of capabilities for the entire team.

To overcome this bottleneck, you can provide technical training to the other team members to improve overall capability after each successive sprint. As the team is no longer dependent on one person, the bottleneck no longer exists. Thus, the team’s efficiency gets improved significantly.

Retrospective meetings are the meeting where you can discuss story points, define critical impediments, and analyze burndown and velocity charts. These meetings help promote a “Continuous Improvement” mindset. A highly motivated and focused team would be more productive. For instance in a team of 15 developers, if we improve the productivity of one member by 5% (by implementing some of the suggestions provided in retrospectives), his focus increases around 15 to 20 minutes than usual every day.

Note: Team members don’t need to extend in the office for 15–20 minutes post-shift, but they can focus for 15 more minutes instead of checking videos online. So, overall, the team will gain around 5 extra developer hours in a day, which is substantial!

Here are a few pointers to make retrospectives more effective:


1. Set the culture for liberal communication

First, an open, honest, yet constructive atmosphere would set the culture where every team member would feel comfortable to put forth their points – positive or negative. Many organizations and teams promote a culture where they want to find a person to blame. If anyone feels unsafe, the purpose of the retrospective will become superficial. Nothing useful will come out of it, and the team will quickly find the retrospective a futile exercise.

Second, even if a team gets to the point of bringing up real issues, there must be a spirit of appreciation for the inputs—only then the real results will follow through. Even the highest-performing teams will find things that can be improved. So, it’s imperative that a right environment is established for the learning and success of a team. Continuous team improvement implies change, and a change requires organizational backing in the form of support, relevant information, and important structures.

It is the role of the facilitator to gauge the temperament of the team and introduce freshness to the retrospective continuously. Following are some possible changes to consider:

I. Think of creative and innovative ways to gather inputs: If a team is asked merely to say what went well and what can be improved, it would never come up with enough points. You must think of something innovative that urges each team member to participate. This needs to be handled creatively. You can club retrospectives with some team-building games as well. In our project, we always conduct retrospective meetings differently.

To make things clear, let me give you an example of our last retrospective meeting. In a team of 16 people; we divided it into two sub-teams of 8 members each. We started with an ice-breaking game called the “human knot” where each team needs to work together to untangle a group knot. Each team member participated, even the new and the hesitant ones. After this activity, we chose the SWOT-style retrospective where the team gave a thought on strengths, weaknesses, opportunities, and threats for our project. Following which we had another team-building game called “What’s in the room?” where each team member needs to identify one object from the room and think of a strategy to sell this object. Everybody participated in this and came up with funny ideas. Such was the impact of this activity that even the nervous ones were not feeling shy in presenting their views.

II. Keep it fresh: Choose a different style for conducting a retrospective meeting.

- The primary thing to keep in mind is that we are getting answers to “What went well?” and “What can be done better?”

- It is equally important to make a note as a team about what we are improving on so that we continue doing it. It also brings positivity to the team.

- Break the monotony by changing the location. People get bored when they always gather in the same place every time. Keep your team guessing about the venue and format of the retrospective.

III. Follow up on the retrospective action items: If the feedback is not utilized, then the entire effort turns out to be futile. Besides, if the results are not implemented, there will be no improvement in any way (thus, it would be a complete waste of time).

Another essential point to remember is keeping the team positive. As humans, most of us thrive on looking at the facts and solving the problems. Correspondingly, many of us lose energy when faced with arguments, confrontations, and differing opinions of the same event. So, why not keep everyone’s energy up in the team by focusing on the utile things? As you know, a positive and happy team – motivated by its forward progression – is in itself a tremendous force!

Here are a few simple ways to inspire your team to be positive:

An enriching discussion always produces meaningful and actionable insights. To ensure that the actions from a retrospective are completed, the resulting action items should be listed, made public, and followed up by an assigned individual. To help focus on forming better action items, you can follow the SMART (Specific, Measurable, Achievable, Relevant, and Timeboxed) way. In the next retrospective, the facilitator should bring the list of ideas discussed in the previous retrospective — both the ideas chosen to be worked on and those not. Doing so can help jump-start a discussion for the new retrospective.

A retrospective is an important custom in an agile company, and the team should use actual work and life experiences to innovate ways of making the sprint retrospective fun and engaging, apart from being educational and transformative. The methods mentioned here may not work for everyone; a lot depends on the team composition and the environment. However, I have witnessed visible improvements in productivity, quality, one-to-one coordination, collaboration, and so on, after using these methods.