Cryptocurrency vs. digital currency (CBDC) – The future of modern banking 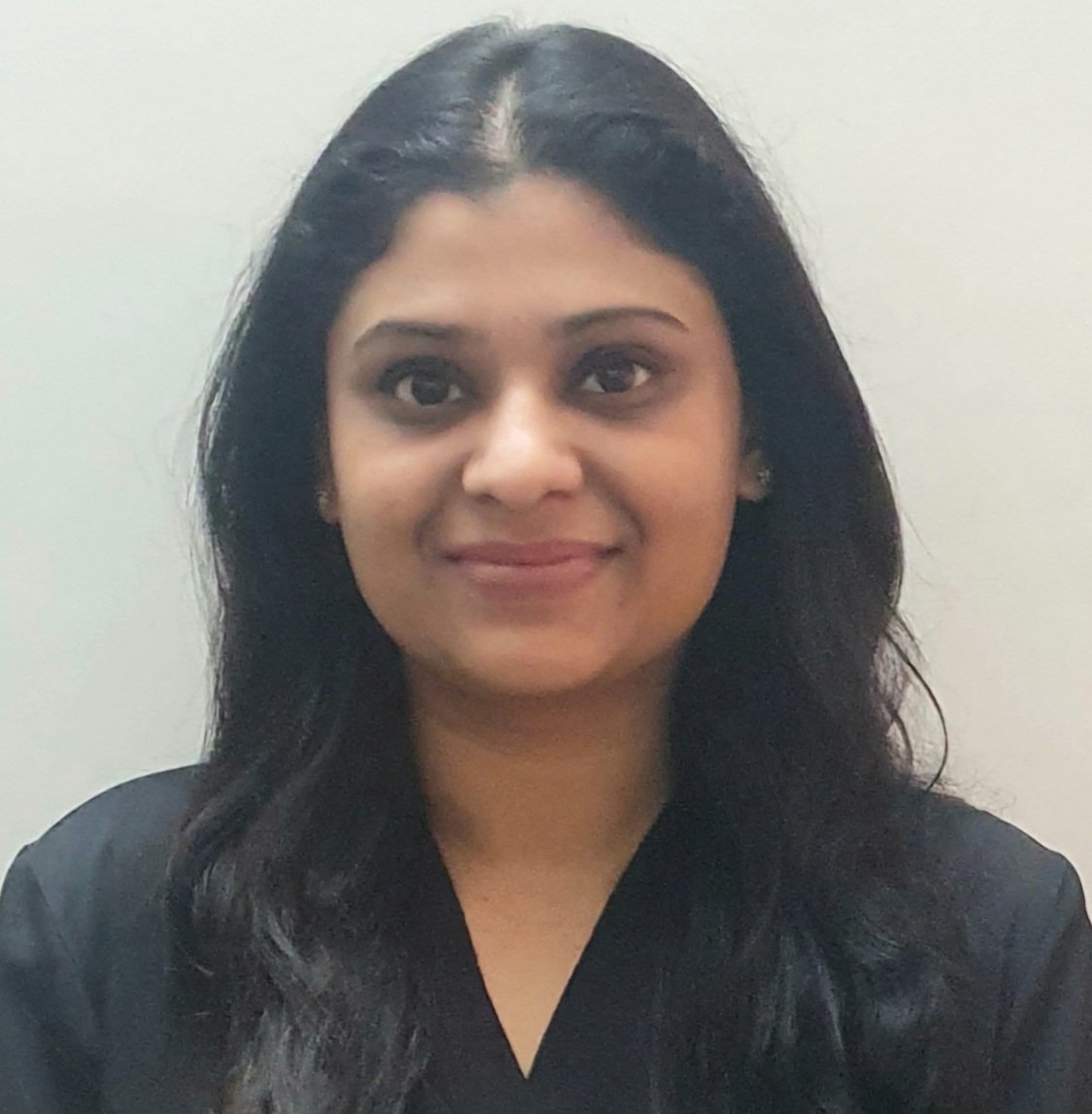 Recently, El Salvador created history by becoming the first country to adopt Bitcoin as legal tender. The move seemed logical for a country dependent on remittances and having high commission costs. El Salvador is one of many economies where people do not have access to modern banking systems and depend on cash or mediums like digital wallets for their daily transactions.

Other countries like China, South Korea, and Brazil have announced the adoption of Central Bank Digital Currencies or CBDCs. European Union, India, and many others are researching the development and adoption of CBDCs, thus raising an interesting comparison of the two digital currencies and their benefits over one another.

It also raises questions on the feasibility and sustainability of these digital currencies. What would be better suited to economies struggling with providing banking infrastructure to their population?

The COVID-19 pandemic has given digital and contactless payments a shot in the arm and increased the acceptance of cash alternatives. Is cash doomed? Let us find out!

Before diving in, let us understand the two digital currencies: 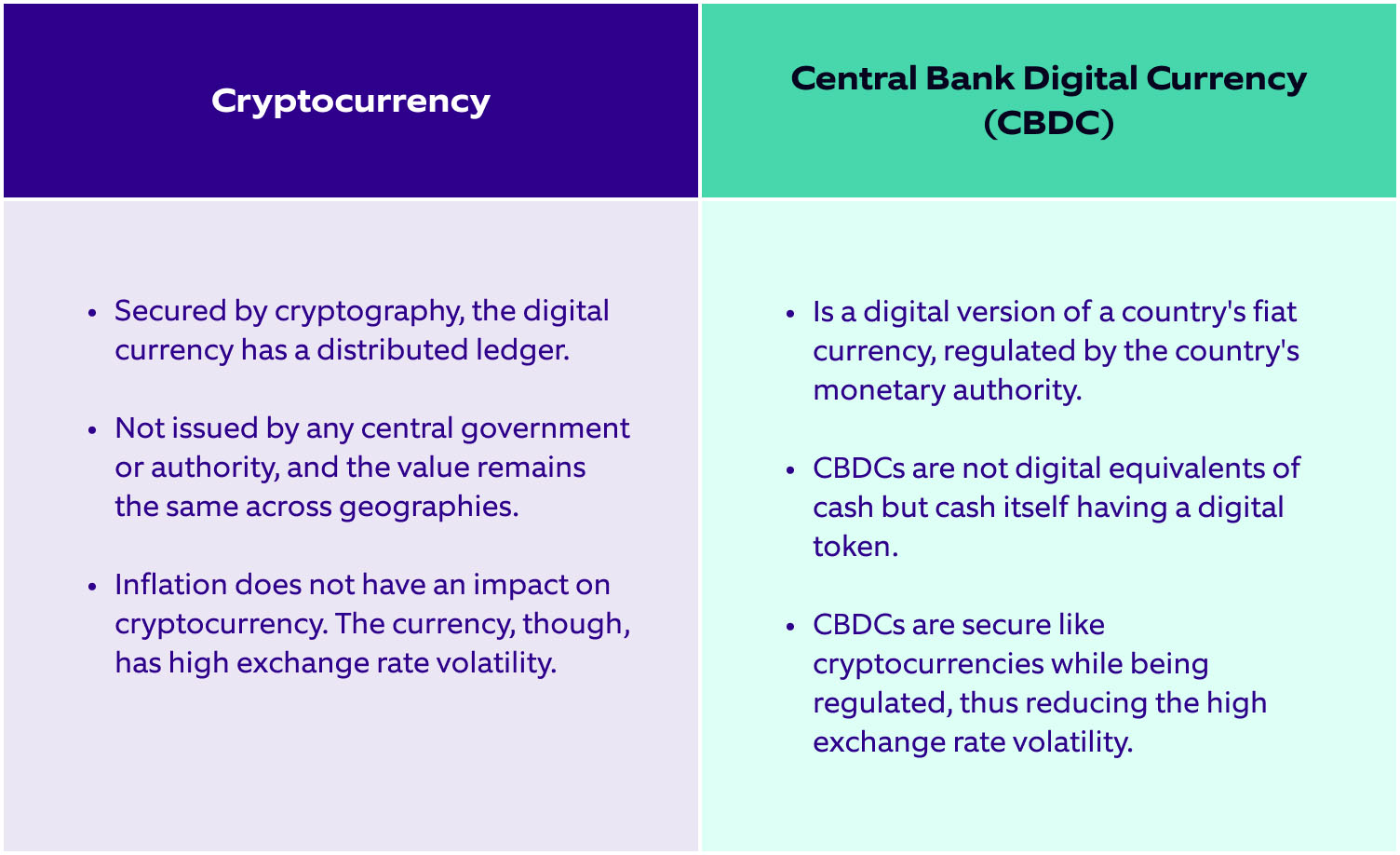 Cryptocurrency: Advantages & disadvantages of adoption and its future

A prominent advantage of adopting cryptocurrency is eliminating the need for managing currency supply by central banks. Money can be transferred anywhere without losing value or a payment system like SWIFT. Streamlined transactions, high security, and lower costs would strengthen trade among countries.

Currently, the US Dollar has supremacy on the worldwide economy, with countries maintaining US Dollar reserves to perform payments for imports. Any sanctions limiting the access to the US Dollar thus impact their ability to conduct trade. An example of this was the 2019 sanction on Iran's energy sector, which increased oil prices while countries looked for alternate crude oil options. Adoption of a decentralized currency would remove such supremacy by a single currency.

For the public, using cryptocurrency as a mode of payment will mean no steep charges for payments and a non-traceable and secure transaction. In economies where a large part of the workforce is outsourced, low remittance charges while sending money back home would help maintain the value of the amount sent.

Reasons that limit the adoption of cryptocurrency

Despite these advantages, governments have not adopted cryptocurrencies, and a prominent reason is their usage in money laundering and tax evasion.

The future of cryptocurrency

Fiat currencies offer a clear understanding of the currency purchasing power which is a missing point for cryptocurrencies due to exchange rate volatility. An average Joe might not be comfortable knowing that the number of goods and services that can be bought with a cryptocurrency unit can vary in a day.

It is also essential to keep track of double-spending. Cash, once spent belongs to a different owner and cannot be spent twice by the same person. But cryptocurrencies can have a copy, and the owner can perform multiple transactions. Miners track such transactions to ensure that the currency is not spent twice.

While cryptocurrencies have established themselves as a favorable option for cross-border payment and day-to-day transactions, it is yet to be seen how it will fare as a payment mode for loans and investment without any formal monetary policy in place.

CBDCs: Advantages & disadvantages of adoption and its future

Countries realized the advantages of distributed digital currency but thought it would be best to be regulated by the monetary authority, which led to the introduction of CBDCs. CBDCs are further divided into:

For this analysis, the focus is retail CBDC.

With the introduction of digital currency, banks would not need to maintain cash equivalent (which is currently a norm). Using a distributed ledger technology, CBDCs are stated to increase payment efficiency while reducing transaction costs (a feature similar to cryptocurrencies). Also, with G20's focus on enhancing cross-border payments, it is time to introduce new, efficient modes.

As mentioned earlier, many in regions like Africa and South America do not have access to modern banking systems. These economies have been working tirelessly on building a financial inclusion strategy, and CBDCs are perceived as a step closer to bringing financial inclusion in such economies.

Governments struggle to perform benefit transfers to the population during natural calamities. People from the lower-income bracket either do not have a bank account or do not use the facility due to high fees. While a few prefer using digital wallets, Cash-In Cash-Out (CICO) transactions are still popular at the retailers' kiosk. With the reduction in money handling and transfer costs of digital currency, it will be easier to convince the population to open accounts and use it for payments. Even if people prefer to keep wallets, cash management will not be required.

China recently launched a CBDC – DCEP. The transactions can be done via QR code scanning, NFC tapping, and even offline. This will prove beneficial to economies where telecom infrastructure is a challenge and high data prices. This is another reason why many people prefer using cash over digital transfers.

Reasons that limit the adoption of CBDC

Despite the benefits, the grass is not green on this end. CBDCs do have their share of challenges.

The future of CBDC

The interoperability of CBDCs from various countries will be the key to facilitating cross-border transactions. While lack of any global regulations enables the adoption of exploring technology, the introduction of the same at a later stage might lead to issues with interoperability. China has already taken the first step in this direction and suggested regulations that are best suited to enable the internationalization of the Yuan.

Economies worldwide are eager to introduce a currency that incorporates advancements of distributed ledger technology and the stability of a fiat currency while having decentralized cryptocurrencies as competition. The coming years will be an interesting phase in the evolution of currency. Gazing into the crystal ball, we can say that Cryptocurrency and digital currency (CBDC) can power the economies of tomorrow, but when is the question that remains unanswered!